Taking the temperature of the Atlantic: Six countries team up on RV Celtic Explorer

An international team of scientists from six countries set sail today (27 April 17) on Ireland's national research vessel, RV Celtic Explorer on a trans-Atlantic voyage to study the impact of climate change on the ocean. Departing from St. John's Newfoundland, and due to arrive in Galway on 23 May, the Marine Institute led team of experts are surveying a transect of the Atlantic Ocean last surveyed 20 years ago to investigate carbon dioxide levels in the ocean. The survey is essential to understand and project how carbon dioxide emissions are accumulated in the oceans and the atmosphere, as well as its effects on the acidification of the ocean.

The survey is part of the Global Oceans Ship-Based Hydrographic Investigations Program (GO-SHIP) which carries out systematic and global surveys of select hydrographic sections, through an international consortium of 16 countries and laboratories. This is the first GO-SHIP survey to involve this level of collaboration with scientists from nine leading universities and research institutes representing six countries joining the survey. 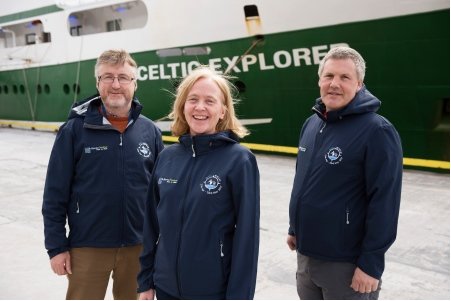 Dr. Peter Heffernan, CEO Marine Institute said, "The Marine Institute is proud to lead this truly international collaboration. This GO-SHIP A02 survey is a very real example of the Galway Statement in action: working together to better understand and increase our knowledge of the Atlantic Ocean and its dynamic systems, and promoting the sustainable management of its resources."

"Ship-based surveys are still the only way to collect the best quality measurements of fundamental physical, and biological properties known as Essential Ocean Variables" explains Dr Evin McGovern, of the  Marine Institute and Principal Investigator on the GO-SHIP A02 survey. "Although technology has provided many new methods to collect ocean measurements, there's really no substitute for going out on the ocean on a research vessel. We can use satellite technology to monitor the ocean surface and can deploy autonomous argo floats to measure carbon to depths of 2000, but we need to carry out ocean surveys that can measure to get a complete picture of the chemistry of the ocean at different depths up to 5000m. The transect we are surveying is a really dynamic area of the Atlantic for heat transport and is hugely important to informing our understanding of our global climate and how the ocean regulates our climate," said Dr McGovern. 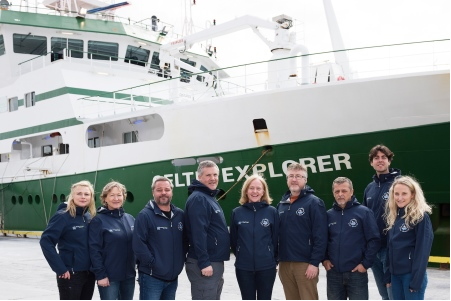 GOSHIP team in Galway Ireland getting ready for their expedition on the RV Celtic Explorer. Photographer Andrew Downes Xposure

"The Northwest Atlantic is one of the world's largest sinks of carbon dioxide and despite progress in our understanding there's still a huge lack of data as it relates to climate change's impact on the ocean and what that means for the economy and society," said Brad de Young, a professor of Physics and Physical Oceanography at Memorial University, Newfoundland and an Ocean Frontier Institute researcher.

"Improving our scientific understanding and developing strategic and effective solutions for safe and sustainable ocean development requires sharing of expertise, international co-operation and exchange of data and best practices. And that's what this voyage is all about" adds Doug Wallace, Canada Excellence Research Chair, Dalhousie University.

The RV Celtic Explorer departs St. John's Newfoundland on April 27, returning to Galway on May 23.