The official handover of European Maritime Day from Lisbon to Cork took place in the Portuguese capital on 16 May 2019.

Cork City is to host European Maritime Day (EMD) next year, 2020. It is the first time that Ireland has been selected by the European Commission to hold this flagship two-day conference which since its creation has become one of the key events in the maritime community's year.

European Maritime Day 2020 in Cork will also coincide with the 300 year anniversary of the Royal Cork Yacht Club (RCYC), the oldest yacht club in the world and the second year of Cork hosting the national maritime festival, SeaFest. 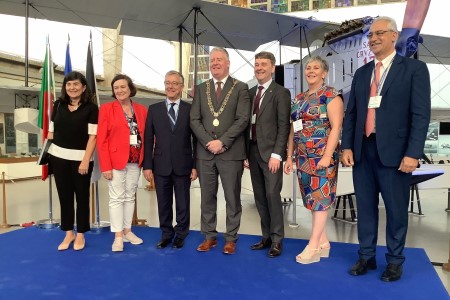 Up to 1,000 different delegates including industry professionals, policy makers, researchers, academics and NGOs take part in the annual EMD two-day conference where they attend political sessions and workshops to discuss challenges and opportunities in the maritime sector including the blue economy, ocean energy and ongoing development potential in areas such as aquaculture and cruise shipping.

Lord Mayor, Cllr Mick Finn said: "Cork hosting European Maritime Day in 2020 – when it will wrap around SeaFest and the RCYC 300 celebrations – is perfect for a city with such a rich maritime tradition. I was honoured to accept the mantle from Lisbon which is another proud port, EU city and I have no doubt it will be a huge success. Greeting 1,000 delegates to the city will be a huge boost for tourism and the positioning of the new, larger city in the EU."

Welcoming the news Dr Peter Heffernan, CEO Marine Institute said: "I am delighted that next year's EMD will be held in Cork. Ireland has earned a strong reputation in Europe, and internationally for its marine research and innovation, and for driving collaboration in this area. EMD will bring together Europe's maritime community to exchange ideas and forge partnerships needed for the blue economy. I look forward to important and fruitful discussions on the balance required to manage our collective blue economies while safeguarding our most precious natural resources".

Up to 100,000 people are expected to gather in Cork next month for SeaFest, the national maritime festival. SeaFest is a fun, free festival aimed at getting the people of Cork and Ireland to celebrate and enjoy our ocean with seafaring fun, seafood demonstrations and lots of opportunities to hop into boats and leisure craft and ride the waves.

Next year, in 2020, SeaFest will once more take place in Cork, but in conjunction with European Maritime Day.