To mark International Women’s Day, organisers of Our Ocean Wealth Summit are delighted to confirm former President of Ireland, Mary Robinson, as key note speaker for this year’s Summit taking place in Galway on Thursday and Friday, June 28th and 29th.

Now in its fifth year, the Our Ocean Wealth Summit forms a key part of the Government’s integrated marine plan - Harnessing Our Ocean Wealth. The Summit is a key event for the marine sector and related industries, offering a platform for discussion on the future of Ireland’s marine sector.

This year the Our Ocean Wealth Summit will extend across two days, with a packed programme of presentations as well as panel discussion, interactive sessions and networking events.  Galway Docks will host the event and its expected to attract more than 500 national and international delegates from across the marine sector.

The largest gathering of Ireland’s marine and business communities, the Our Ocean Wealth Summit attracts high-profile speakers from across the globe, not only from the marine sector but from a wide-range of disciplines.

This year’s key note speaker is Mary Robinson, the 7th President of Ireland and the first female to hold this office. In 2010 she established The Mary Robinson Foundation – Climate Justice, a centre for thought leadership, education and advocacy on the struggle to secure global justice for people vulnerable to the impacts of climate change.

Other key speakers will include Kathryn Sullivan, former NASA astronaut, who was appointed by US President Barack Obama as Under Secretary of Commerce for Oceans and Atmosphere and National Oceanic and Atmospheric Association Administrator (NOAA). She has a long career as a distinguished scientist, astronaut and oceanographer.

Producer of BBC’s award-winning Blue Planet II series Orla Doherty is also one of the highlights of the summit programme. With family roots on the Donegal coast, Orla has had a strong connection to the sea. She is an expert in underwater filming and has filmed scientists at the frontline of ocean discoveries from Indonesia to the Arctic Circle.

This year’s theme is ‘Investing in marine Ireland’ and the Summit will focus on progress towards the Government’s ambitious targets to double the value of the blue economy by 2030. 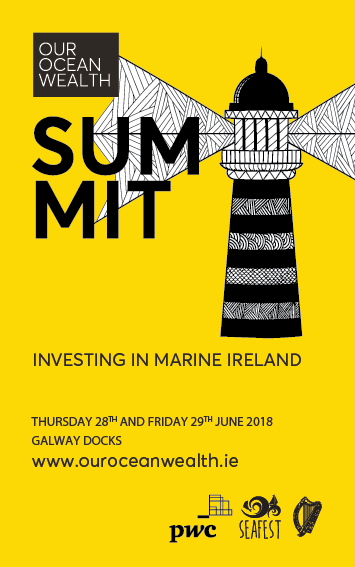