More than 50 famous landmarks and buildings in Ireland and across Europe are lighting up blue this weekend (8-10 June) as part of the 'Go Atlantic Blue' initiative to celebrate our connection to the Atlantic Ocean and to mark World Oceans Day (8 June). The global day connects people worldwide in celebrating the ocean, its importance in our lives and how each of us can protect it, no matter where we live.

In its inaugural year, the 'Go Atlantic Blue' campaign has had an incredible response with more than 50 landmarks and buildings coming on board in Ireland alone. These include airports, State buildings, lighthouses, castles, aquariums and even a windmill.

Businesses, schools and homes across the island are also joining in by putting up blue decorations, wearing blue clothing, painting their faces blue, sharing their love for the Atlantic online and much more. 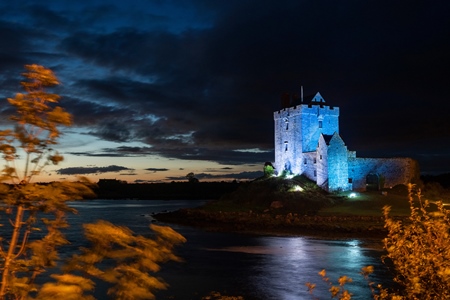 Ireland's 'Go Atlantic Blue' campaign has now even gone global and internationally we are joined by the European Commission Directorate General for Research & Innovation in Brussels, Ifremer in France, PLOCAN in Gran Canaria Spain, Ciência Viva in Portugal, and the International Council for Exploration of the Seas in Denmark – all of which celebrated the Atlantic in their own 'Go Atlantic Blue' way.

'Go Atlantic Blue' is being spearheaded in Ireland by the Marine Institute-led AORA-CSA (Atlantic Ocean Research Alliance Co-ordination & Support Action) against the backdrop of SeaFest 2019 (7-9 June) and Our Ocean Wealth Summit (9-10 June), both taking place in Cork.

It's the first year to 'Go Atlantic Blue' with the aim of raising awareness of the vital role that the Atlantic Ocean plays in the lives of Irish people, no matter how near or far they live from the Atlantic coastline.

Dr Peter Heffernan, CEO of the Marine Institute, said, "Our ocean is our greatest natural resource and we see that most directly in Ireland with the vital importance that the Atlantic Ocean plays in our daily lives – from influencing the weather to facilitating our trade industry and from seafood to surfing off the coast."

Director of Atlantic Ocean Research Alliance Co-ordination & Support Action, Dr Margaret Rae, said it was wonderful to see how 'Go Atlantic Blue' had captured the imagination of people all over Ireland and Europe.

"This is the first year of the 'Go Atlantic Blue' and the response of Ireland and our Atlantic Ocean neighbours has been tremendous, next year let's see if we can go Atlantic-wide lighting up in blue along and across our Atlantic Ocean - who knows it may catch-on and we'll see a 'Go Global Ocean Blue' happening, but no matter what, it's all to raise awareness of the vital role that the Ocean plays in the lives of our peoples, it is the beating heart of the planet and its currents are the lungs and circulation". 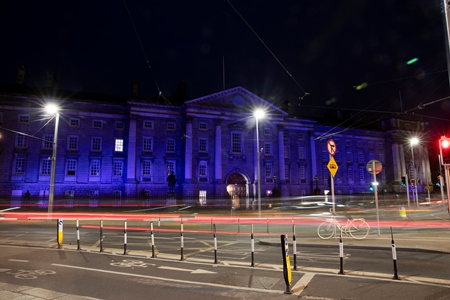