Minister of State at the Department of Agriculture, Food and the Marine, Andrew Doyle T.D., today launched the Duncannon Blue Flag Farming and Communities Scheme, a European Innovation Project (EIP) funded by the Department. The aim of the project is the recovery and long-term retention of the Blue Flag status at Duncannon beach by dealing with pollution from both agricultural and domestic sources. This project is one of 23 EIPs or locally-led schemes funded by the Department of Agriculture, Food and the Marine under the current Rural Development Programme.

The community based scheme is a collaborative initiative and will involve stakeholders from throughout the Duncannon area. Speaking at the launch the Minister commented that; “one of the objectives of this scheme is to generate a greater sense of local ownership, responsibility and appreciation for the local water environment in the Duncannon area. Its implementation will, through the co-operation of all local stakeholders, ultimately bring about improved water quality and a better environment in this area”.

The Duncannon Blue Flag Farming and Communities Scheme has been allocated €550,000 under the scheme to improve the bacterial quality of the two coastal streams that flow onto Duncannon beach. The Operational Group for the project is representative of a number of stakeholders and is led by Wexford County Council. It also includes personnel from Teagasc, local agricultural consultants, Glanbia, Bord Bia, local farming community and the IFA.

The Minister concluded; “this is exactly the type of scheme that was envisaged when my Department chose to drive the EIP initiative under the current Rural Development Programme. It complements extremely well the many other water quality improvement projects which my Department is supporting. As with all EIP projects, the knowledge from this project will be shared, through the EIP network, with similar communities throughout Ireland and will help to improve water quality in other sensitive catchments areas”. 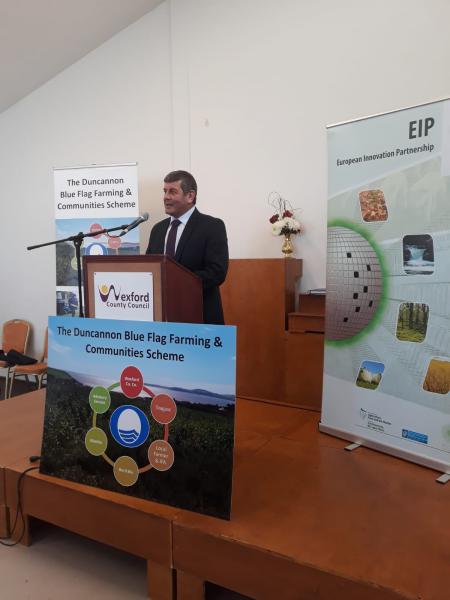