The Map of Ireland Is Bigger Than You Think

One of the key outputs of the Our Ocean Wealth Summit and Seafest, Ireland's national maritime festival, is to engage and inform the public about our maritime heritage, landscape and ocean wealth. This weekend, the Marine Institute has erected a 13 x 10 metre ‘Real Map of Ireland’ on the side of the RH Hall building in Cork Harbour, with the kind permission of the building’s owners. The aim? To raise the awareness of Ireland's extensive but unseen subsea terrain.

Few people realise that when our seabed territory is taken into account, Ireland is one of the largest countries in Europe. The Real Map of Ireland clearly depicts the full extent of Ireland's marine territory of over 220 million acres (880,000Km2), which is ten times the size of the island of Ireland. The red line on the ‘real’ map depicts the limit of Ireland's territorial waters and Exclusive Economic Zone, which extend out across the North Atlantic Ocean and include parts of the Irish and Celtic Seas.

Speaking ahead of Our Ocean Wealth Summit on 9 and 10 June, Marine Institute CEO, Dr Peter Heffernan, said, "The sea that surrounds us is one of our greatest natural resources. As a small country it's so important that we value and recognise our immense ocean wealth. We must, of course, manage the health of our oceans also.” The Our Ocean Wealth Summit in Cork this year brings together national and international actors in science, policy and civil society to discuss how we can continue to grow our ocean economies while protecting our precious marine resources. “Getting that balance right is a key to sustainability" explained Dr Heffernan.

So if you are out and about in Cork at the weekend, take time to look at the Real Map, proudly displayed in a building size display, and remind yourself that the map of Ireland is bigger than you think. 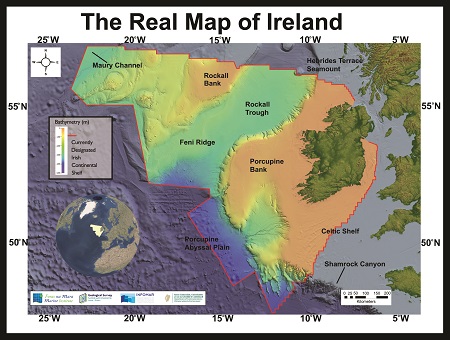 Seafest and Our Ocean Wealth Summit are co-funded by the Government of Ireland and the European Union under Ireland's European Maritime and Fisheries Fund (EMFF) Operational Programme for the seafood sector.