The Minister for Agriculture, Food and the Marine, Michael Creed T.D., welcomed the success of agri-food and marine companies, in partnership with Ireland’s leading research performing organisations including Teagasc, the Marine Institute, the Universities, and the Higher Education Institutions, who will collectively receive in excess of €5 million in funding under the inaugural Call of the Government’s new Disruptive Technologies Innovation Fund (DTIF).

Speaking shortly after the announcement of the funding on Tuesday, December 10th by An Taoiseach and the Minister for Business, Enterprise and Innovation, Heather Humphries, Minister Creed said  ‘this is a huge boost for the agri-food and marine sector and highlights the innovation potential that exists in our SME’s and research performing organisations, particularly when working together in close collaboration. I would like to take this opportunity to congratulate the applicants on their success in what was a highly competitive funding call.’

In recognition of the agri-food and marine sector’s importance and significant role it plays in maintaining rural economies and communities the minister further added that ‘I have been particularly encouraged by the participation and success of rural based SME’s under this Call. These industries are vital to the economic stability of the country as a whole and the opportunity for SME’s to collaborate with some of our leading academic institutions will be of enormous benefit in the safeguarding and future growth of the economy, jobs and rural communities.’

The Fund is a key part of the Government’s ‘Future Jobs’ initiative, a new whole-of Government plan to secure Ireland’s economic success, starting in 2019. It is one of the first funds of its type in the world and is aimed at tackling national and global challenges to secure the jobs of the future.

These projects will contribute to achieving the goals of the National Marine Research & Innovation Strategy 2017-2021 and address a number of research themes including Bioresources, Ocean Observation, and Information & Spatial Technologies, Analytics and Modelling. 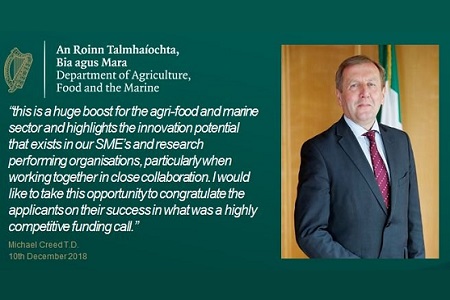 About the Disruptive Technologies Innovation Fund:

The Disruptive Technologies Innovation Fund is a €500 million fund established under Project Ireland 2040 and is run by the Department of Business, Enterprise and Innovation with administrative support from Enterprise Ireland. Funding is available for co-funded projects involving enterprises and research partners over the period to 2027. The first Call relates to projects that will be funded from 2019. Projects can be funded for up to 3 years.

15 major themes are considered under the Strategy. The Strategy is focused on applied and demand-led research, while recognising the importance of a fully functional marine research system that extends from basic research, through applied research, to translational utilisation of research outputs.