Publication of the National Adaptation Framework

Ireland's first statutory National Adaptation Framework (NAF) was published today by Minister Denis Naughten T.D. The NAF sets out the national strategy to reduce the vulnerability of the country to the negative effects of climate change and to avail of positive impacts. The NAF was developed under the Climate Action and Low Carbon Development Act 2015.

The NAF builds on the work already carried out under the National Climate Change Adaptation Framework (NCCAF, 2012). The NAF outlines a whole of government and society approach to climate adaptation in Ireland. Under the NAF a number of Government Departments will be required to prepare sectoral adaptation plans in relation to a priority area that they are responsible for. Work on these plans will begin in 2018. Local authorities are required to prepare local adaptation strategies The NAF will be reviewed at least once every five years. The NAF also aims to improve the enabling environment for adaptation through ongoing engagement with civil society, the private sector and the research community.

A summary of each chapter of the NAF is provided below.

Chapter 2 sets out the progress to date on climate change adaptation planning in Ireland, including work undertaken at sectoral and local government level and initiatives involving civil society and the research community.

Chapter 4 outlines how the Framework will be implemented with revised Governance and reporting arrangements as well as actions and supporting objectives that are to be progressed.

The National Adaptation Framework can be downloaded from the site of the Department of Communications, Climate Action & Environment. 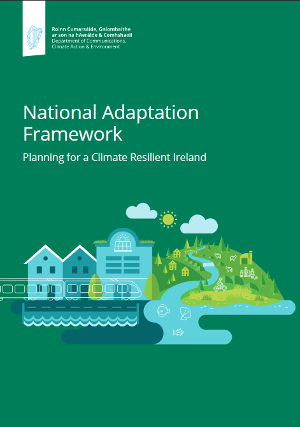