According to the latest iShip Index[1] published by the Irish Maritime Development Office (IMDO), shipping and port activity in the Republic of Ireland rose by 1% in the second quarter of 2017 when compared to the corresponding period of 2016.

Unitised traffic - which consists of Roll-on/Roll-off (Ro/Ro) and Lift-on/Lift-off (Lo/Lo) traffic - continued to rise, growing by 3% when compared to Q2 2016.

The majority of Ro/Ro traffic moves between Ireland and Great Britain, meaning this freight segment is a simple but reliable indicator as to the level of trade between both economies. The Ro/Ro freight sector for the Republic of Ireland saw volume growth of 3% in the second quarter of 2017. This is the fifth consecutive Q2 increase in this freight category.

When reviewing unitised traffic it is worth noting that both Lo/Lo and Ro/Ro freight segments move in an all-island setting. Therefore, when Northern Irish (NI) ports are included, all-island Ro/Ro volumes grew by 2% in Q2 2017. All-island Lo/Lo traffic grew by 3.5%, with all-island imports and exports rising by 1.1% and 6.6% respectively compared to Q2 2016.

NI Ro/Ro volumes grew by 2%, while NI Lo/Lo traffic grew by 2.8%. This was driven primarily by 4% growth in NI Lo/Lo exports.

The Bulk traffic segment saw tonnage volumes decrease by 1% (excluding transhipments) in the Republic of Ireland when compared to the same period last year. This was driven primarily by a 3% fall in Dry Bulk tonnage. Break bulk volumes grew by 3% while liquid Bulk traffic remained stable compared to Q2 2016.

Summary of Shipping Volumes for Republic of Ireland: 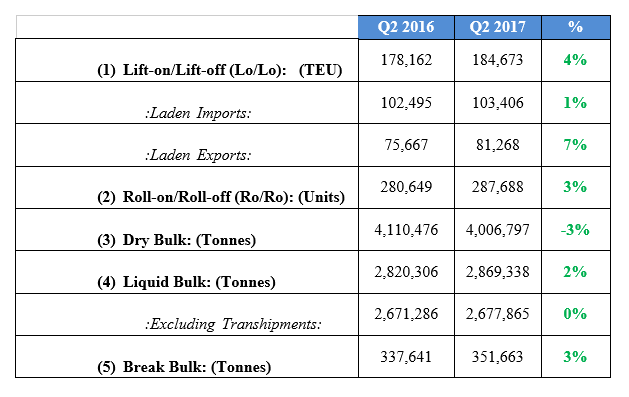 [1][1]Note: *The iShip index is a volume index for all freight traffic moving to and from the Republic of Ireland. This does not include passengers or transshipment activity.
Note: All percentage figures refer to quarter on quarter changes. i.e. Q2 2017 v Q2 2016