The 4th SEMRU Report, Ireland's Ocean Economy, demonstrates that Ireland's 'blue economy' is performing better than the general economy. The figures show that the direct economic value of Ireland's ocean economy was €1.8 billion or approximately 0.9% of gross domestic product (GDP) in 2016, which represents a 20% increase on 2014 levels. The ocean economy provided jobs for more than 30,000 people in 2016.

Dr Heffernan said, "Investment in research for Ireland's marine sector has been essential in shaping the strategic development of our blue economy. These timely marine economic statistics are vital for evidence-based policy and decision making. It's very encouraging to see that established sectors are performing so well, and that emerging sectors such as those providing advanced marine technology products and services, and renewable energy, are experiencing rapid growth in Ireland's ocean economy."

"The ambition set out in the Harnessing Our Ocean Wealth Strategy is to achieve a €6.4 billion ocean economy by 2020 and to do this in a sustainable manner requires joined up thinking and close collaboration between agencies and organisations driving innovation, progress and success in our marine sector. The SEMRU reports are a key component of Ireland's marine strategy which requires comprehensive and targeted surveys and reporting, so that we can benchmark the marine sector with other sectors, monitor progress and performance and create a better understanding of the dynamics of the marine sector." 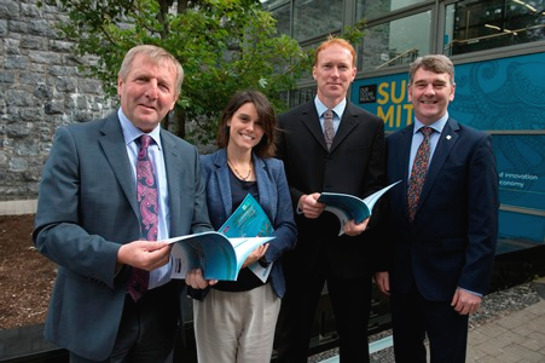 The National Marine Research & Innovation Strategy was also launched by Minister for Agriculture, Food and the Marine, Michael Creed T.D., at the Our Ocean Wealth Summit. This Strategy will ensure that the outputs of new research and innovation are combined with existing knowledge to maximise the value of the marine economy. Covering the period from 2017 to 2021, the Strategy which was prepared by the Marine Institute on behalf of the Marine Coordination Group.

Welcoming the publication of the National Marine Research & Innovation Strategy, Marine Institute Chairman Dr John Killeen said, "The Marine Institute, as the national agency for Marine Research and Development was pleased to coordinate the development of this strategy. We look forward to it informing the Institute's investments, including our plans to co-fund with other government agencies and departments on projects in a range of marine related research disciplines."

The Harnessing Our Ocean Wealth Progress Report 2017 was also published at the Summit, which took place as part of SeaFest, the national maritime festival, SeaFest, in Galway, this weekend (Friday June 30th to Sunday July 2nd )with a packed programme of free, family friendly activities and entertainment on offer for all ages. SeaFest aims to deliver a key goal of Harnessing Out Ocean Wealth - Engaging with the sea.

Copies of all reports launched at the Our Ocean Wealth Summit 2017 are available in the Publications section.