The Minister for Agriculture, Food and the Marine, Michael Creed T.D., has outlined the Government’s continued commitment to the development of the marine sector in Ireland and the ongoing implementation of Ireland’s Integrated Marine Plan - Harnessing Our Ocean Wealth.

Addressing delegates at the annual ‘Our Ocean Wealth’ Summit today in the National University of Ireland, Galway, which included national and international and industry leaders, policy makers, researchers and maritime entrepreneurs, Minister Creed said “Ireland’s marine sector is a very important part of our national economy and we have seen significant growth in the ‘blue economy’ over the past few years. I welcome the new report published today by the Socio-Economic Marine Research Unit at NUI Galway which shows that the marine sector has grown significantly since the publication of  Harnessing Our Ocean Wealth in 2012 and in the period 2014 to 2016 alone we have seen a 23% increase in turnover, a 20% increase in gross value added (GVA) and crucially a 10% increase in employment. This transformation is being brought about by the commitment and hard work of various State agencies, Government Departments, relevant stakeholders and investors”. 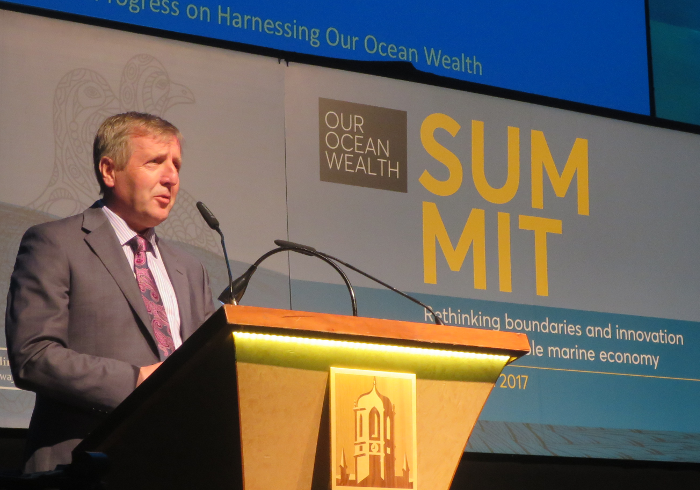 The Minister continued “I am also delighted to announce the publication today of the annual Progress Report on Ireland’s Integrated Marine Plan - Harnessing Our Ocean Wealth, for 2016. The Report sets out the considerable recent progress achieved in implementing the ambitious targets and actions outlined in the Plan and shows us that the Government’s commitment to its ongoing implementation is delivering real growth in the sector.”

The 'Our Ocean Wealth Summit' format now in its fourth year forms a key part of the Government's integrated plan for Ireland's marine sector and brings together national and international speakers, industry experts, business development agencies and the Irish business and marine research community. This year’s discussions focussed on the theme of 'Rethinking Boundaries and Innovation for a Sustainable Marine Economy'. A new Marine Research and Innovation Strategy for 2017 – 2021 was also published to coincide with the Summit. The intention of the Strategy is that the outputs of new research and innovation are combined with existing knowledge to generate value within the marine economy. The Strategy focuses on the broad topics identified in existing Government policies and strategies and provides a framework which recognises the complexity of research funding in the marine domain.

Welcoming the Strategy, Minister Creed said the “Government has endorsed this Statement of Strategy as a framework to assist those government entities participating in the funding of marine related research and innovation and I look forward to receiving updates on its implementation”.

The Minister also welcomed the recent announcement by the European Commission that Cork City is to be the host city for European Maritime Day 2020. Minister Creed said; ‘I am very pleased to again congratulate Cork City on being designated by the European Commission as the host City. European Maritime Day is the flagship event  in the European Union’s maritime calendar, consisting of a two day conference with over 1,000 stakeholders from across the European Union coming together to discuss the development of this sector.  This will be the first time that Ireland has hosted this flagship event and I am confident that Cork will prove to be  an excellent location’.

The Our Ocean Wealth Summit and SeaFest are initiatives of the Inter-Departmental Marine Coordination Group, which is chaired by Minister Creed. The Summit is part of a range of industry and innovation events taking place in Galway as part of SeaFest 2017 from 29 June -2 July. A wide range of public events are also taking place in Galway Harbour and Docks and the city over the weekend (1-2 July).

Publications released as part of the Our Ocean Wealth Summit 2017 can be viewed on our Publications page.