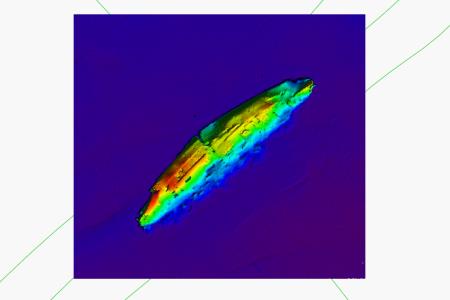 Minister of State with responsibility for Natural Resources at the Department of Communications, Energy & Natural Resources, Joe McHugh T.D., and Minister for Arts, Heritage and the Gaeltacht, Heather Humphreys T.D, yesterday welcomed the publication of new state-of-the-art sonar imagery of the RMS Lusitania. Members of the INFOMAR team (INtegrated Mapping FOr the Sustainable Development of Ireland's Marine Resource) from the Geological Survey of Ireland and Marine Institute, working with the National Monuments Service of the Department of Arts, Heritage and the Gaeltacht, have published additional new sonar imagery of the wreck of the RMS Lusitania.

The current condition of the RMS Lusitania on the seafloor, 100-years after its sinking on May 7th 1915, is revealed in greater detail than ever following a recent survey with a state of the art new multibeam echo sounder onboard the Marine Institute's R.V. Celtic Voyager. The imagery puts into context where the wreck lies in relation to landfall, as well as the scale and history of the site. It creates a tangible connection to the wreck and to the dramatic and tragic events that surrounded its sinking. The 240m long vessel is clearly defined on the sea floor, lying on its starboard side and standing over 14m high above the seabed. 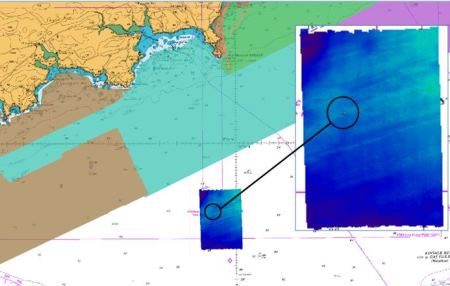 Minister McHugh said that "The new imagery of the Lusitania provides the most detailed information and overview of the wreck site compiled to date and provides a solid framework upon which new research and analysis can be based".

Minister for Arts, Heritage and the Gaeltacht, Ms Humphreys, highlighted that it is fitting that these images are being published in the centenary year of the sinking of the Lusitania. The imagery will provide important information on how the shipwreck has changed over the last 100 years.

This new survey data is extremely important from a site protection point of view. It will add to our knowledge and understanding of the wreck site on the seabed, its current condition and how the site has changed or degraded over the years. Additionally, the data, in tandem with previous information from individual divers to the site, will be very beneficial in developing our understanding of the physical processes at play at the wreck site and in the surrounding seabed and should help inform long term management strategies for protecting, investigating and conserving the wreck .

One hundred years on, the Lusitania is beginning to reveal its wounds, scars and perhaps its secrets, and may continue to do so for many years to come.